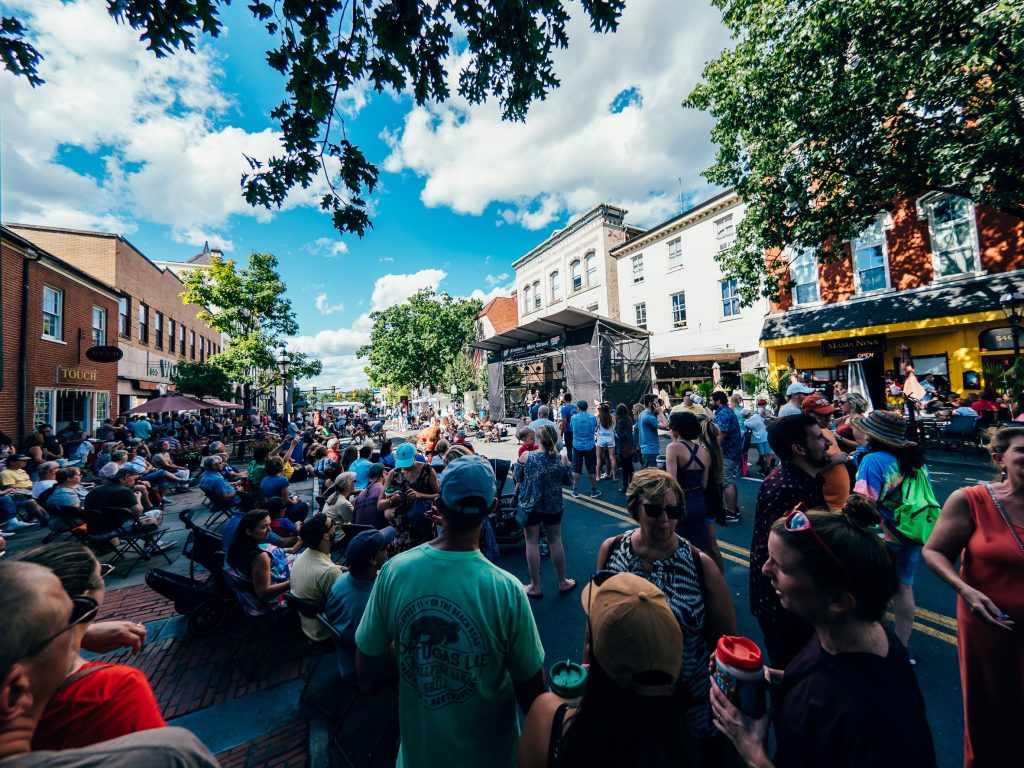 Lined with shops and restaurants the Provident Bank Main Street stage is right in the middle of all the action! You won’t miss it! Here are 10 performers you can stop and listen to while strolling down Main Street!

Carly Moffa was a contestant on Season 16 of American Idol. Her corky spirit and her passion for music is what sent her to Hollywood and it’s what is bringing her to the Musikfest stages this year!

There is a tender sweetness to their sound as well as depth, mystery and an other-worldly quality. The music and lyrics of The Wild Hymns are greatly influenced by human relationship, emotion, nature, and mysticism; they are reclaiming the word “hymn” as a song of praise to the natural world, the raw and wild human spirit, and universal/cosmic love.

Stephen Babcock is a singer songwriter hailing from Upstate New York. After spending much of his time on the road performing with acts such as Canyon City, Ed Sheeran, Girl Blue, William Hinson, and more Stephen released a batch of new singles through 2020 and 2021!

Formed in 2019 by guitarist/vocalist Colin Wolf, Singer Marie Defilipps, and Drummer Kevin Kunkle, Smooth Retsina Glow is one of the most hard working and prolific bands to emerge in Lehigh Valley.

Stacy is an accomplished performer, recording artist, and songwriter with a passion for writing and performing songs with catchy lyrics and memorable melodies. She has been seen working in the entertainment industry on and behind stages and screens in Music, TV & Film across the country from NYC to Los Angeles. She has most recently been named “Best Local Musician of 2021” by Lehigh Valley Style Magazine and has won several top Lehigh Valley Music Awards!

Singer & Songwriter Joe Miralles has been performing his original music in the tri-state area for over 15 years. Joe’s credits include 6 independent releases. Joe’s music has been featured on Sirius XM, WXPN 88.5fm and other nationally syndicated music shows.

Fig for a Kiss

Based out of the Lehigh Valley, Fig For a Kiss is an acoustic, Celtic folk band with a unique blend of Irish, Scottish, Cape Breton, Blue Grass and contemporary influences.

Currently, with a New York State of Mind and a Midwestern Spirit, Singer/Songwriter iamchelseaiam uses her guitar to deliver melodic riffs, taking audiences on a rhythmic journey. Frequently touring the country she has opened up for Grammy Nominated artist Lucky Daye, and additionally played Bunbury Festival and notable stages such as City Winery and the Blue Note NYC. She has been a featured artist on BET and has performed in Times Square for the Black Lives Matter Movement.

Los Angeles-based street singer, guitarist, and roots music revolutionary Sunny War has always been an outsider, always felt the drive to define her place in the world through music and songwriting. Her restless spirit, a byproduct of growing up semi-nomadic with a single mother, led her to Venice Beach, California, where she’s been grinding the pavement for some years now, making a name for her prodigious guitar work and incisive songwriting, which touches on everything from police violence to alcoholism to love found and lost.