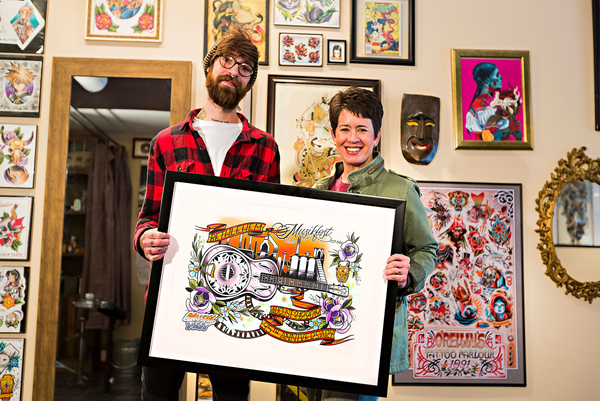 For Lansdale resident Dan Mugrauer, his latest work of art provided the opportunity to set aside his normal tools of the trade – ink and needle – and take his art in a totally new direction. Instead of body art, he focused on fine art as he undertook one of his largest commercial projects ever.

The artist behind this year’s official Musikfest artwork, Mugrauer is a successful tattoo artist who also does a handful of commissions each year. Last fall, the 28-year-old was approached by ArtsQuest to take on the task of creating the image that will be used in almost every element of the festival this year, from official Musikfest apparel to the event’s iconic mugs.

“I really wanted to share what I think of Musikfest, as well as represent my art form and my style of doing things,” Mugrauer says of his work. “The goal was to have those two concepts converge and result in a great work of art.”

Kassie Hilgert, President & CEO of ArtsQuest, says that ArtsQuest was really looking to take the Musikfest artwork in a new direction for the festival’s 35th Anniversary celebration and Mugrauer has truly left his mark.

“Dan’s skill as a tattoo artist, coupled with some of his fine art training, really led him to develop his own style, combining classical artistic elements with the more contemporary stylings of tattoo art,” Hilgert says. “This poster not only honors our festival and our city’s history, it incorporates many of those timeless elements that people love about Musikfest. We were looking for something totally different this year and Dan really nailed it with this beautiful work of art.”

The owner of Blood Moon Tattoo Syndicate, a tattoo shop and gallery specializing in body art, Mugrauer has been a tattoo artist for the past six years. He says one of things that might make his work slightly different from previous Musikfest posters is his style as a tattoo artist.

“I’ve developed my own style after six years, so I tried to bring that into the work, “says Mugrauer, who also attended the School of Art Institute of Chicago to study painting. “I wanted to put as much of myself into the piece as I could, while still trying to live up to what I was being asked to do. This is a very special year for Musikfest, and I’m honored I was invited to be part of it.”

Originally sketching the images out on a drawing pad, much like he would a new tattoo, Mugrauer then got to work creating a digital illustration on his iPad, spending weeks perfecting the image. While the final artwork is filled with Musikfest images – a steel guitar, the iconic blast furnaces at SteelStacks, a hidden Musikfest Lyre and even a nod to the original Musikfest logo – you’ll also notice beautiful blooms woven throughout the piece. Those purple-, blue- and teal-hued flowers just so happen to be a signature element of his body art.

“I love flowers. A flower is a great physical space and just so classic, so I pretty much end up trying to put flowers in everything,” he says. “For tattooing and art in general, they just work so well – you can’t really go wrong.”

Over the coming months, ‘fest fans will see Mugrauer’s work of art popping up everywhere, starting with the Musikfest website. It will also be used for the official festival poster and mug, while being incorporated into other official `fest merch and apparel throughout the year. ArtsQuest is also looking to have the artwork transformed into temporary tattoos that people will be able to get during Musikfest.

“We are thrilled with Dan’s design for this year’s Musikfest poster,” says ArtsQuest Director of Marketing Jon Lunger. “The opportunity to work with a visual artist in what many consider to be a non-traditional discipline is particularly appealing to us as it’s a reflection of the exciting and often surprising programming that’s presented at Musikfest each year. We’re looking forward to using this in so much of our marketing and our merchandise. This poster is a truly dynamic piece that represents the history and tradition of tattoo art, as well as the traditions of the festival, pushing towards the future of both.”

One of the largest music festivals in the nation, Musikfest features more than 500 performances on 16 stages throughout Bethlehem over 10 days. Dates for the 35th edition of the festival are Aug. 3-12. For more information, visit www.musikfest.org