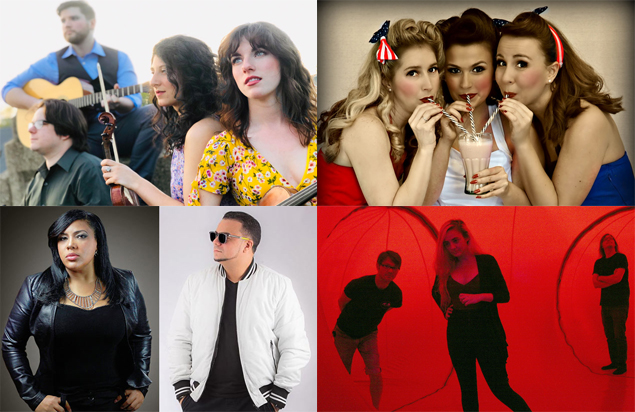 ArtsQuest books hundreds of local musicians throughout the year, and Musikfest is no exception! From local music and dance schools, to established performers and bands playing a wide variety of genres, we put together your ultimate guide to supporting local talent at the ‘fest! Below is an A-Z list all of our local performers for Musikfest 2019!

The dancers from Allegro Dance Studios in Emmaus, Pennsylvania are ecstatic to be performing at Musikfest, 2019!

Join Jolly Joe Timmer’s band based out of Bethlehem, Pennsylvania, pays tribute to the late polka artist at opening night of Musikfest.

This duo draws inspiration from new-folk artists like Ray Lamontagne, Noah Gundersen, and The Lone Bellow, to bring to the stage a refreshing sound that is reminiscent of an older time.

Aneudy Puello began his artistic career in 2012 with the recording of the success of the bachatas songs, “La Tortolita.”

NuRock Post-Prog Crunch Wave coming from the farthest reaches of the outer and inner universes, delivered by 5 dedicated souls to the music lovers of the Earth.

Ben Tyler’s pop-based melodies and emotionally-driven lyrics have landed him many opportunities, opening for national acts including Guster, Simple Plan, Tyler Hilton, Ludacris, and Collective Soul among others.

Fronted by singer-songwriter, Billy Bauer and accented by the other-worldly tones.

The group is made up of players from the Caribbean and the Lehigh Valley. They are the only known steel drum band in the area, bringing a unique musical sound to the region.

Firmly rooted in classic rock, Common Bond offers an eclectic mix of the best music from the 70s to today.

CMS is a non-profit charitable organization which provides the inspiration and opportunity for anyone in their diverse community to achieve excellence in music education and appreciate the transformative power of music.

Copper Fields band has powerful lyrics, a crisp and full sound and a blend of voices that rise in harmony with each song

Praised by JazzTimes for “superb technique”, American jazz singer Corinne Mammana is passionate about preserving the music of the past while placing her own personal spin on the American Songbook.

The Craig Thatcher Band has been entertaining audiences with their exciting brand of classic blues/rock and dance music, along with some noteworthy original material since 1993.

Dave Fry has been at the center of the Lehigh Valley folk music scene for fifty years, as a family music performer, adult soloist and performer with numerous bands

Formed in 2010, Dear Anna is a band who’s performances resonate with people of all generations, and who’s music blurs the lines of many genres.

From Classical to pop, string quartets, harpists, and guitar players, the Elysium Quartet offers an impressive repertoire played by versatile and accomplished musicians.

You really can’t put Tommy in a category of music as he performs a very wide variety of genre. You just have to come, relax, enjoy and see for yourself.

Fig for a Kiss

Fig for a Kiss is a Lehigh Valley based acoustic, Irish folk band with a unique blend of Celtic and contemporary influences.

Friar’s Point Band was formed in 2006 and quickly became one of The Leigh Valley’s top blues-rock acts. Known for its musicianship and originality, Friar’s Point has represented The Lehigh Valley at The International Blues Challenge in Memphis Tennessee, three times.

Fusion Jazz Trio (FJT) has been a staple in the Lehigh Valley for almost 17 years. This trio blends bold percussion, funky and innovative bass lines, and electrifying keyboard

HALA is focused on mentoring and developing youth, showcasing the richness of Latino culture, and building bridges of understanding in the community.

Hector Rosado, an accomplished percussionist, has toured with the best in the business. He has traveled nationwide, as well as world tours with music titans such as David Burne, Dave Valentine and the legendary Tito Puente.

Herencia Jibara is an energetic, fun, and diverse Latin band

Formed in the Summer of 2002, Island Time has evolved over the years into a 6-piece group that has gained in popularity.

Jeff has been playing guitar as long as he can remember, and prides himself on his powerful vocals and vast array of creative covers that span from country to rock.

Jimmy Farrell has been playing Irish folk music in the New Jersey and Pennsylvania areas for over 30 years. His early influences came from American folk and country music artists, along with the Irish music.

Fans of the guitar, upright bass and drums will be delighted, as the players in this trio are veterans of the jazz world.

John released his first EP entitled, Person in 2014 and most recently released a second EP, Sleep in 2017. John strives to speak to the reality of our world, while offering a delicate hideaway from its clamorousness.

Jon Fadem has been playing guitar since he was 13, and studied music at Oberlin College and Conservatory.

Keystone focuses on the rich musical legacy of Jerry Garcia–particularly the more funk, jazz and soul-influenced music that he made during his lifetime

After taking a thirty-year sabbatical, Musikfest will be the first performance of the “Kübler and Ross: Together Again For The First Time Farewell Tour.”

A showcase hosted by La MEGA radio station with a line up of your favorite Latin acts!

Lehigh Valley based Laura Purfield is a singer-songwriter from a small village in Ireland called Julianstown. She has been in America for the last 6 years teaching and playing music.

A pop/jazz vocal summer camp sponsored by The Lehigh Valley Charter High School for the Arts.

Affiliation with the state PMTA and national MTNA organizations enables teachers to take advantage of member collaboration and networking, student performances in recitals, auditions and master classes and more!

The Lou Franco Project has been wowing audiences in the Lehigh Valley and beyond for over 15 years. This band is primarily focused on classic rock, with the guitar being at the forefront.

Vocalist and pianist Maria Rosé is a graduate of both the Lehigh Valley Charter High School for the Arts and Berklee College of Music. She performs locally and at music festivals.

Led By Mike Lorenz and Jacqui Armbruster, The Witherbees is a band dedicated to exploring songs they love, deconstructing them and then putting them back together.

The O’Grady Quinlan Academy of Irish Dance is proud to be the only certified school in the Lehigh Valley registered with An Comisuin Rince Gaelcha.

Dina Hall and Beth Sherby have been playing music together since 2000 and continue to grow with each passing year.

This is Orbital’s second year performing at Musikfest. They have performed with groups and places like the State Theatre, Red Hot Chili Pipers, and more!

Robbie Lawrence and The Steelworkers

The Steelworkers are the newest polka band on the Lehigh Valley scene. Comprised of a mixture of industry veterans and rising talents, the band looks to carry on the legacy of Lehigh Valley polka legends, such as Walt Groller, Jolly Joe Timmer and others.

Roi and the Secret People

Renowned for their exciting live shows, Roi and the Secret People (RSP) features the mesmerizing voice of Mike Roi and the musical talents of Craig Marty, Jason Hedrington, Glen Radomski, and Ed Golden.

After playing together for years on the road paying tribute to The Talking Heads, these seasoned musicians have crafted original material that is loud and evolving.

SATORI is a mixed ensemble of winds, strings and piano, based in PA’s Lehigh Valley and now beginning its 24th season.

The Bank Street Band is a collection of students from the Allentown and Easton School of Rock locations that represent the school and the program. Most of the students are multi-instrumentalists and aged 14-18.

Along with the charisma and charm they bring to their shows, Scott Marshall’s Marshalls Highway have established a brand of Americana music to bring a top shelf musical experience that continues to entertain audiences of all ages and musical tastes.

Serene Green is the collective musical vision of Pennsylvania natives whose passion for playing together comes from a deep love for traditional bluegrass music.

Seth Witcher is a 20 year old college student/music artist based out of Allentown, PA. When he is not studying, he is out performing and perfecting his craft.

Shane Reimer and Them Spicy Boize

Shane Reimer and Them Spicy Boize are an in your face rock ‘n’ roll power trio.

Combining a robust low-end with sweet and delicate melodies, Carly makes full use of her heavily affected keyboard while also providing vocals while Tom fills out the sonic middle ground with his drum kit.

Smith Compound Band covers a wide range of artists and genres, with a focus on tunes that everyone has heard and loves but virtually no other band plays.

With a large catalogue of original music and a good mix of popular and obscure covers, Spiders Dressed in Red are a happy musical family.

Starting Tomorrow is a rock cover band comprised of four musicians with an ironic band name…unless it’s the day before a gig.

Steppin’ Out! is a seven-piece Texas Swing band that has performed in the Lehigh Valley since the early days of Musikfest and beyond.

Steve Brosky has been writing songs and performing them to audiences in Philadelphia, New York, and his native Lehigh Valley for over 35 years.

Stray Seeds are an energetic folk/jam group from Bethlehem, PA!

Summer Scouts is a five-piece indie rock band based out of Allentown, PA.

Sunshine Symphony aims to bring back the fun songs that you remember, while performing today’s hits as well.

For more than 10 years, the ‘Varks have been evolving and maturing (kind of) into the premier rock band of the Lehigh Valley, mixing time periods and styles of covers and original music into their non-stop, high energy sets.

A Lehigh Valley, PA staple, The BC Combo is known by their signature sound since 1992. “It’s all about feelin’ good…” whenever they are performing!

The Bryan Tuk Complex is an instrumental guitar/bass/drums groups that stylistically plays 1970s and 80s tunes in our own style, that fuses funk, jazz & rock together

An accomplished female trio of violin, calrinet, and piano.

The Great Djembe Jam is a Lehigh Valley based group of drummers formed to create rhythm and vibes of good will.

Take a Groovy Trip back to the ’60s with Large Flowerheads! Imagine being part of the scene when the songs spoke of love, sunshine,and happiness.

Every summer between 40-50 music students from The Lesson Center, ranging in age from 11 to 18, come together from across the school’s five Lehigh Valley locations to learn to work with their peers in Rock and Pop bands

The Slicked Up 9’s

Rising from Lehigh University in ‘98, The Slicked Up 9’s unleash an energetic tribute to the original R&B music – Jump Blues.

The SwingTime Dolls is an all female vocal group consisting of three of the area’s most accomplished vocalists that shine a new light on the tunes of the American Hit Parade of the 1940s and beyond..

Bethlehem-based funk, pop-rock band focuses on playing dance hits from the 70s through 2010

This Way to the EGRESS

Trouble City All-Stars blends old sounds of traditional reggae with some more modern aspects to accomplish a solid sound to get your feet moving.

•ITO• based out of Easton, Pennsylvania was formed in 2016 by Galen Deery (ukulele and vocals), his brother Simon Deery (bass), and long-time family friend Michael Lear (drums).