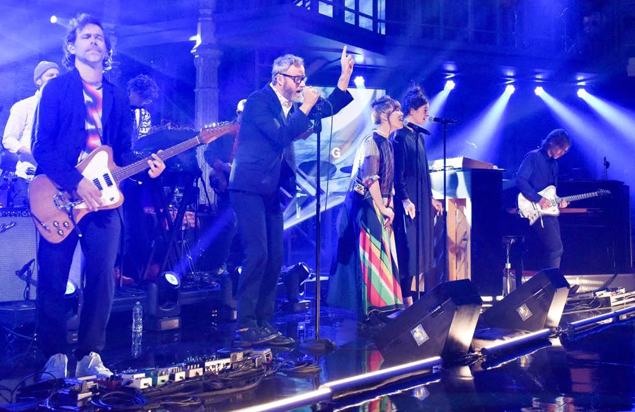 It’s a big deal getting on ANY national television show, let alone FIVE of them! Late night shows like to feature the up-and-coming artists or the bands the hosts love most. It’s clear that The National is one of them.

Before indie rock band The National hops on the Wind Creek Steel Stage at PNC Plaza on the night of July 31, check out a handful of their appearances on your favorite late night talk shows!

THE LATE SHOW WITH STEPHEN COLBERT

Stephen Colbert, host of the top-rated late night talk show in America, welcomed The National on his CBS program to perform “Rylan” from their I Am Easy to Find album.

Ellen DeGeneres sure knows how to crack up, surprise and entertain a crowd. On this particular episode, she pleased the audience with the Grammy-nominated band and their performance of “Day I Die”.

Anyone who’s anyone has performed on Saturday Night Live over the last 45 seasons. Appearing on the revered show in 2014, The National performed two of their hits, “Graceless” and “I Need My Girl”.

It’s hard not to get hooked on Jimmy Kimmel’s show with his wit and sense of humor. Since his studio is smack in the middle of Hollywood, Jimmy knows what’s up in the world of entertainment. In 2019, he featured The National who performed their song “Where is Her Head.”

Before playing at the Ed Sullivan Theater for Colbert, The National performed there in 2007 on The Late Show with David Letterman.

Live your best life and spend a late night with The National at Musikfest on July 31!