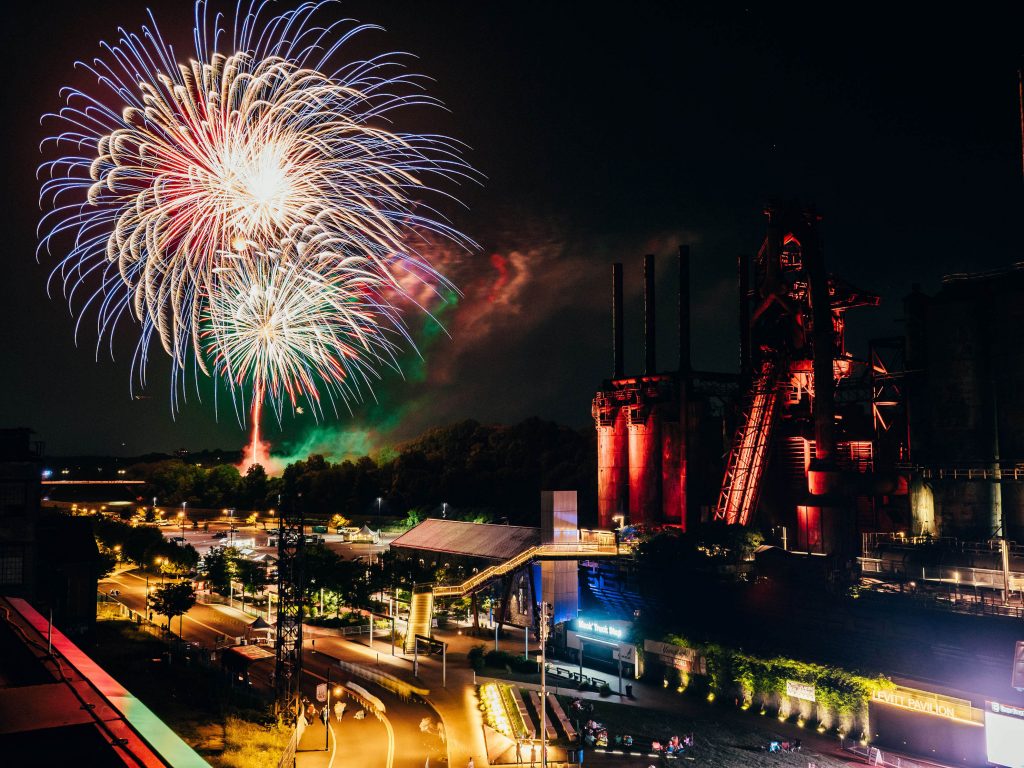 BETHLEHEM, PA—As fireworks exploded over Bethlehem last night, ArtsQuest put the wraps on the 37th and most unique edition of Musikfest in its history.

Instead of thousands of people filling the streets and live music coming from stages set up in Bethlehem’s parks and plazas, music fans across the nation were treated to 90-plus streaming concerts by artists as diverse as Robert Randolph, KT Tunstall, Alexis P. Suter and Kiran Ahluwalia & Rez Abbasi. In addition, there were still some of the familiar sights and sounds of Musikfest, with five smaller, live shows on the Air Products Town Square at SteelStacks and a special “Fest Food To-Go” area at PNC Plaza at SteelStacks where patrons could purchase take-home food from 10 of the festival’s most popular vendors.

“As a community-focused organization, ArtsQuest felt it was more important than ever to keep our community connected through music and the arts during this pandemic and we were committed to presenting a 37th Musikfest,” says ArtsQuest President and CEO Kassie Hilgert. “Working with partners like DÜZY TV, Service Electric TV, Discover Lehigh Valley, our local media and others helped us spread awareness of Musikfest and our region well beyond the Lehigh Valley.

“During the week, we had people from more than a dozen countries and 150 cities in the U.S. watch our Virtual Musikfest streams, including individuals as far away as Japan and Peru. We thank our corporate partners, supporting ArtsQuest Members, volunteers, staff, patrons, performers and the local small businesses who came together to present this event for our community and music fans across the globe.”

While Musikfest typically draws one million people to the city and region, this year the festival shifted gears to keep music fans engaged in new ways while helping to support small businesses and independent artists via initiatives like the Virtual Handwerkplatz online shopping portal and the ‘Fest Food To-Go’ area on PNC Plaza. ArtsQuest financially supported more than 85 performing artists/musicians, as well as 25 vendors who took part in the 10-day event. Some like Aw Shucks and Hogar Crea made their only area appearances of the summer at Musikfest, much to the delight of fans.

“We feel privileged to participate in ArtsQuest’s efforts to provide loyal Musikfest patrons with the ability to still enjoy our food offerings,” says Boris Schneider, owner of Island Noodles. “We did rather well considering the circumstances everyone is living and working under right now due to the pandemic.”

Without the support of 45 corporate partners and 3,300 supporting ArtsQuest Members, there’s a good chance there would have been no Musikfest at all this year. Some partners like Wells Fargo and DG Yuengling & Son stepped up in new and innovative ways to help with programming like the “Your HausPlatz Backyard Contest” with Billy Bauer and the photo scavenger hunt on the Musikfest App powered by PNC. Service Electric, a partner since the inaugural Musikfest in 1984, hosted 38 performers from a specially constructed stage in its warehouse, affectionally called ‘GaragePlatz’, while also underwriting the costs of the closing-night fireworks.

“Since Musikfest started, Service Electric has been bringing great musical acts right into our subscribers’ homes, and we wanted to make sure this year was no different,” says Service Electric President John M. Walson. “Our whole team came together with the teriffic team at ArtsQuest and put together an amazing 10 days of live concerts, and we look forward to hopefully returning to a more normal Musikfest next summer.”

In most years, the community supports Musikfest by purchasing concert tickets to shows, or food and beverages at the festival. This year, however, it came together to help ArtsQuest in an entirely new way, making donations as part of the One Million ’Festers $500,000 matching gift campaign to help sustain ArtsQuest during the crisis and ensure the festival returns in 2021. The campaign has been gaining momentum with each passing day, with several anonymous donors stepping up behind the scenes to support the nonprofit and the festival.

Due to this year’s unique format for Musikfest, and the many different ways patrons were able to engage and participate, ArtsQuest will not release an official attendance figure for 2020. Information on the One Million ‘Festers Matching Gift Campaign and how and where people watched the Virtual Musikfest streaming concerts is still being complied and will be announced later this month.

“ArtsQuest is an innovative organization that has played a key role in supporting tourism and economic development in our city for more than 35 years,” says Bethlehem Mayor Bob Donchez. “Even in a year when everyone expected them to cancel Musikfest in its entirely, they were one of the few organizations in our region offering programming for our residents and trying to draw people to our downtown to support local businesses.

“Just one example of this was the Musikfest on Main merchandise tent on Main Street, which exposed a number of people to the businesses on Main Street. The city applauds their efforts and we are excited to see what they come up with for events in autumn and the holiday season.”

ArtsQuest, the nonprofit behind Musikfest, typically presents 11 festivals and 1,000 concerts annually, with 50 percent of them free to attend. The organization, however, has essentially been closed since mid-March due to the COVID-19 crisis, losing nearly $20 million in revenue.