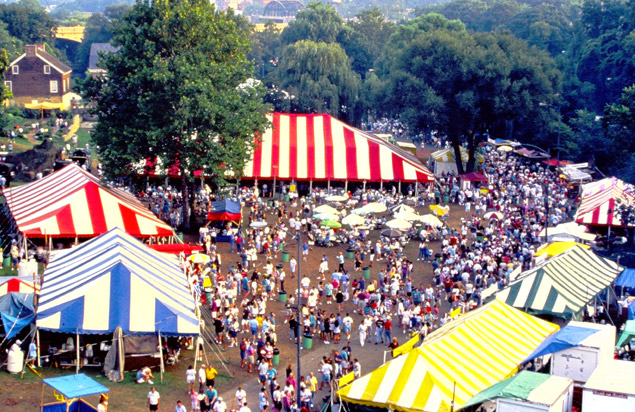 Bethlehem, PA – August 7, 2018 – To celebrate the 35th year of Musikfest, PBS39 has created a documentary entitled, “The Story of Musikfest” in partnership with ArtsQuest. It will premiere Thursday, August 9, at 6:00 pm on PBS39. The show is hosted by PBS39’s Grover Silcox, and includes an exclusive behind-the-scenes look at the event, dating back to 1984. Featuring vintage footage from the very first year until present, this documentary takes an in-depth look at the festival through the eyes of volunteers, staff members, public officials, musicians, and community members.

One of the originators of Musikfest, Jeff Parks, gives viewers some insight into the challenges and triumphs that came along with creating and sustaining the festival in the early years. The current CEO of ArtsQuest, Kassie Hilgert, discusses how the festival has grown and changed over the years to become the largest free music festival in the nation. The first Musikfest featured 295 performances on six stages, attracting more than 180,000 people to historic Bethlehem. Now the festival includes over 200 tents, over 500 shows, 1,700 volunteers, and entertains nearly a million guests over the ten-day event.

The documentary recounts a variety of memorable moments from the 35 years of Musikfest, including the rise of the event during the demise of Bethlehem Steel, the flood of 2011, the weeks of construction and preparation each year, and even “The Chicken Lady.” One segment includes Grover Silcox and five of the original volunteers and staff members watching early footage at the Frank Banko Alehouse Cinema at ArtsQuest, and discussing their memories of the early days of the festival.

Tim Fallon, CEO of PBS39 said, “This singular event has been a cornerstone of the Lehigh Valley’s cultural and economic community, and PBS39 is proud to bring the story of Musikfest to the world. We are so honored to be able to provide this behind the scenes look at the history of this truly special event.”

“Public television is a vital resource that informs and educates our residents about the important and impactful issues and events that help shape our community,” says ArtsQuest President & CEO Kassie Hilgert. “Musikfest started as a community festival 35 years ago through the support of the local volunteers, businesses, artists and the city, so it’s more than fitting that our community public broadcasting and communications station, PBS39, is doing a documentary on the festival during this milestone year.

“This one-hour special is the next step in the growing partnership between our two nonprofits that has resulted in a diverse array of music, arts, education and community programming in recent years. PBS 39 is known for the in-depth reporting and quality production that go into its award-winning documentaries, so we know this will be an exceptional piece that highlights the role that everyone in our region played in making this festival possible. We thank the station and all of its staff for the many hours they have put in over the past two months to create this special look at the nation’s largest free music festival.”

About PBS39
PBS39 is a community-owned public television station licensed to Allentown, Bethlehem, and Easton, Pa., serving eastern Pennsylvania and New Jersey. PBS39 is owned and operated by the Lehigh Valley Public Telecommunications Corporation. PBS39 acts as the catalyst to promote civic engagement, and to fulfill the regional needs of the Greater Lehigh Valley through its dynamic communication platforms and resources. For more information, visit www.pbs39.org.

About ArtsQuest
ArtsQuest™ is a Bethlehem, PA-based nonprofit dedicated to presenting music, arts, festivals, cultural experiences and educational and outreach programs that aid in economic development, urban revitalization and community enrichment. Through festivals such as its flagship event, Musikfest®; the Banana Factory® cultural arts and education center; and the ArtsQuest Center and SteelStacks™ arts and cultural campus, ArtsQuest’s programming reaches more than 1.8 million people annually. For more information on ArtsQuest, visit www.artsquest.org or call 610-332-1300. Follow ArtsQuest on Facebook or Twitter @ArtsQuest and @SteelStacks!