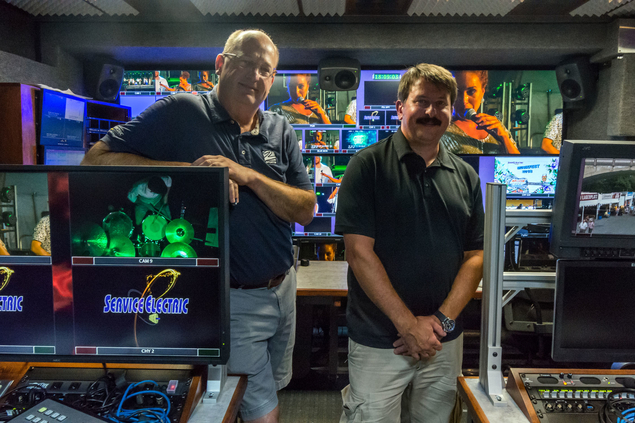 Covering Musikfest since the event’s first year in 1984, Service Electric is recognizing its 35th year of covering the festival by broadcasting the most live music coverage in its history.

“This year we are broadcasting 208 hours of live performances across our two HD channels,” says Service Electric TV2 General Manager Andy Himmelwright. “There are so many high-quality bands across the 57 acres of festival grounds. In addition to the live broadcasts, we are now taping more performances than ever and getting them on the air. Musikfest closes at 11 o’clock and these shows air throughout the night and the next morning leading up to us going live again at noon.”

There’s a huge reason the cable company has been able to ramp up its coverage of Musikfest this year, and that’s its new, state-of-the-art HD mobile production truck. The interior of the 40-foot-long truck, which was custom built and completed just in time for Musikfest, features a control center that monitors 16 cameras, 16 channels for replay and four channels for graphics feeds. It also features the ability to feed 280 channels of audio into the mix, providing the best possible sound for everything from intimate concerts at Liederplatz to rockin’ shows at Americaplatz.

“Mixing music is a lot more complicated than just being able to sit in the audience and listen to a band,” Himmelwright says. “If you see a trumpet playing on television, if there’s not a microphone in front of that trumpet, you won’t hear it. Every instrument, every vocalist, every source of audio has to come in to the audio mixer and be mixed down so you hear it.”

In an effort to cover Musikfest extensively for its viewers, Service Electric deploys dozens of production and on-air staff throughout the festival grounds, broadcasting concerts from six stages over the 10 days of the event, while sending roving reporters to cover stories ranging from the festival’s food vendors to unique educational programs like ArtsQuest’s Marketing Musikfest. The cable company has three production trucks, as well as 24 different cameras on the North and South sides.

“We have the capability to cover five different concerts at once,” Himmelwright says. “Some will be shown live, while others are being recorded for rebroadcast.”

ArtsQuest Chief Operating Officer Curt Mosel says Service Electric’s coverage of Musikfest, as well as other ArtsQuest events throughout the year, helps with marketing and promotion of Musikfest and SteelStacks as great destinations for music, art and cultural experiences.

“Service Electric’s broadcast support provides invaluable promotion of our programming, while its overall support allows us to invest in additional free music for our patrons,” Mosel says. “When you’re a free-admission music festival like Musikfest, the support of local businesses and corporate partners is essential and Service Electric has been a leader in this area since day one.”

In addition to its extensive Musikfest coverage, Service Electric provides the fiberoptic network throughout the SteelStacks campus and keeps everyone connected by partnering with PenTeleData to provide free public WiFi throughout the festival grounds.

Himmelwright says being the exclusive broadcast partner of ArtsQuest and Musikfest allows it to provide unique content to its viewers – in this case people who may not be able to get to the festival – while also helping to support a dynamic nonprofit in the community.

“Our commitment continues to grow with ArtsQuest because we believe in our community, and events like Musikfest and the other festivals that ArtsQuest puts on throughout the year enhance our region,” he says. “Corporate support helps to continue the free music at Musikfest, as well as all of the different programs ArtsQuest offers throughout the year.”